The Leviathan of Western Art 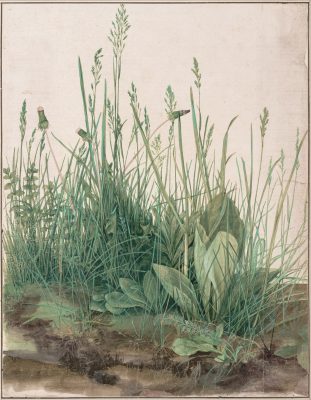 We could probably have a long conversation about this over coffee or wine, but the central, defining feature of art in the “modern era,” which began with the Renaissance (circa 1500), and continues to this day, is its subject matter. Catalyzed by the runaway mercantilism that was consuming Europe, which was fueled by the imperial looting of South Asia and the Americas, a universal attitude of “discovery” gave rise to modern science and permeated the arts. Artists gradually began to open the aperture of their interests to include more than just Jesus, Mary, and the saints – eventually, anything became fair game. Among the most prescient harbingers of this movement was the German painter and printmaker Albrecht Dürer.

Painting with a level of photorealism never before achieved, Dürer ventured beyond the devotional and into the future: his subjects ranged from his aristocratic peers in Nuremberg, to the natural world, to what he saw in the mirror – Dürer was the first to paint himself, establishing the self-portrait as an artistic genre. In this sense, Philip Hoare’s poetic, deeply personal elegy to Dürer, Albert and the Whale: Albrecht Dürer and How Art Imagines our World, is a quintessentially modern work. By examining Dürer’s influence on poets, novelists, and musicians throughout the ages, Hoare constructs a colorful, if abstract, profile of the German master, while also sketching an amusing self-portrait of his own.

Albrecht Dürer has not quite maintained the star power of Leonardo da Vinci and Michelangelo outside the artistic intelligentsia, but he was equally important as his Italian contemporaries in championing of the ideals and zeitgeist of Renaissance Europe. During this time, art was the voice of major economic, political, and religious revolutions that, collectively, represented the molting of medieval society. Although Italy was the undisputed epicenter of the artistic world, Dürer transformed both the content and the business of art by capitalizing on intellectual and technological innovations in his home country.

The Vatican’s stranglehold on Germany had became tenuous, and Dürer’s sympathy for the Protestant Reformation, a campaign spearheaded by his compatriot Martin Luther, freed him to explore more than just the standard iconography of the Catholic church in his art. Dürer was also the first to mass-produce art by opportunistically adapting the printing press, the invention of another fellow countryman, Johannes Gutenberg, into an artistic medium. With printmaking in his repertoire, Dürer reached a far greater audience than any artist before him. In effect, he invented popular art.

Aside from his portraits, Dürer’s work falls into two, very distinct categories. The first is a strange fusion of ancient German imagery, Christian mythology, and naturalism. An emblematic example is St. Eustace, a depiction of the hunter-cum-saint who was converted when he saw a crucifix sprout like a third antler from a buck’s forehead. For Dürer, this story – which he sets in a Bavarian forest under a Gothic castle – was an opportunity to pander to the church while literally hybridizing religion and naturalism. Interestingly, as Hoare points out, Dürer’s religious works are mostly prints from woodcuts; that is, they were for the masses. “Everyone loves animals, after all. Especially when they turn out to be God.”

Personally, I was first drawn to the other, remarkable subset of Dürer’s catalog: his hyper-realistic paintings (not woodcuts, mind you) of plants and animals. The level of detail he realized in his representation of a bat, a stag beetle, a bullfinch, a bouquet of violets, transcended art by simultaneously heralding the scientific revolution. Unlike his religious work, these hypnotizing paintings, which could still substitute for biology textbook illustrations, had nothing to do with Europe’s past.

Hoare agrees. “We feel more for Dürer’s beasts. Saints clamour for our adoration; animals couldn’t care less; they seem saintly to us because of what we have done to them.” One of Dürer’s most famous paintings, The Young Hare, is so striking in its precision that Hoare describes his involuntary reflex to reach into the canvas to rescue the scared animal from her fate in Dürer’s kitchen: “I want to cradle her, to save her. But her skin will make glue for more canvases, and her bones will be licked clean, too late to tell her that she is the history of art.”

In this light, the nominal “plot” of Hoare’s dreamy narrative is loosely centered on a spontaneous trip that Dürer made in 1520 from Nuremberg to the coast of Zeeland, a Dutch province, to see another biological specimen. Dürer was going through something of a mid-life crisis, we learn, after the death of his longtime patron, the Holy Roman Emperor Maximilian, leaving the 50 year-old artist in need of both work and artistic inspiration. When he caught wind that a beached whale had suddenly appeared on the Zeeland shore, Dürer took it as an omen, and decided that painting the dead leviathan was the cure to all his problems. At least that’s how Hoare imagines it, and he has us saddle up to ride along for the expedition. Dürer is Ahab, and you can call Hoare Ishmael.

As in Moby Dick, however, most of Albert and the Whale is spent pursuing indulgent digressions from the central story line, which ends up serving as an arbitrary starting point from which to explore Dürer’s legacy through the work of Hoare’s literary heroes. In unexpected, middle-of-the-book chapters, we find ourselves on a Swiss mountaintop with the novelist Thomas Mann, and walking down Greenwich Village side-streets with the poet Marianne Moore, who were as enchanted by Dürer’s imagery as Hoare is with theirs. Melville is another of Hoare’s favorites and the two share an almost fetishistic interest in whales (each of Hoare’s four previous, equally genre-defying books, treat whales or the sea). It is easy to surmise that Hoare discovered Dürer, triangulated him as it were, through Moore, Mann, and Melville.

If he doesn’t lose you with his meandering prose, Hoare, an English creative writing professor, will deliver a fresh, meditative perspective on Dürer’s art, nowhere to be found in the many academic treatises on the subject. One spiritual climax of Hoare’s cerebral adventure has him (clad in flip-flops and shorts) nervously walking through the basement of The Albertina, a fine arts museum in Vienna, to be shown another of Dürer’s most famous works. The museum’s curator unveils Dürer’s Great Piece of Turf, a breathtakingly detailed, monotone painting of a patch of grass, dandelions, and yarrow that Dürer ripped from the ground and brought to his studio. Hoare stares into the small, life-size image:

Reaching to the sun, from two floors beneath the sky. It too is one to one. We look through it, as he did, a mole’s eye view. He turns us into botanists.

Hoare recounts several of these artistic pilgrimages, and it is when he is face-to-face with Dürer’s paintings, including those of Dürer himself (Would I have liked him? Would he have cared?), that his inner art critic is most poignant. At other time times, his abstractions can be inscrutable – we sense that Hoare is hiding Dürer behind poetry rather than describing him with poetry. Occasionally, Hoare does pause to deliver a punchy cocktail party one-liner, “Nobody painted dirt before Dürer,” but the reader who signed up for a traditional piece of non-fiction will become quickly disillusioned.

While Hoare’s impressionistic portrait of Dürer is alternately insightful and blurry, when it comes to his own psyche, Hoare provides a vivid introduction. He walks us through a forest of ideas and, often, leaves us alone to try to follow his mental trail. The breadcrumbs he leaves are the dozens of uncaptioned illustrations throughout the book. Mostly, these are reproductions of Dürer’s drawings, paintings, or prints, but nearly as often they are photos of whales, or of the author’s travels, or both. We gradually realize that we are reading what seems to be a exploded, then manicured version of Hoare’s travel journal.

Ultimately, accompanying Hoare on his creative exploration of Dürer makes for a liberating mental ride. On the other hand, if you’re a Dürer neophyte, Albert and the Whale is not the best primer. Like a lot of good poetry, Hoare’s fragmented train of thought is at times challenging and, dare I say, postmodern (if you’re wondering, Dürer never found the whale, and Hoare becomes irreversibly distracted from that story anyway). But by the end of the line, I was not only eager to see more of Dürer’s remarkable portfolio in person, I found myself curious to hear Hoare’s impromptu musings on my other favorite Dürer works.

Post-script. This is a book review I wrote for a science-writing workshop I recently took. It’s written in the style of a New York Times piece by a pretentious NYU professor, which I pretend not to be, but the book was about an interesting subject so I’ll leave the review here, with thanks to Stephen Hall and Sam Franklin, Ph.D., for editing.

The book was a really interesting and pleasantly disorienting read, although I wouldn’t go around proffering it to just anybody unless they were really into Dürer, really into Philip Hoare, or reasonably adventurous with their book choices (although, when I was fumbling around the internet about it, I saw that Patti Smith loved it, so there’s that). However, if you live in New York City, what I would recommend is taking the 6 train to see the collection of Dürers at The Met. Then, if you have time, run across the park and check out the blue whale replica at The Natural History Museum. Finally, if you’re sufficiently stoked, take the train back downtown, pick up a copy of Albert and the Whale at The Strand, and enjoy.